At a Good Friday service in 1980, Leonard Bolioki stepped to the front of the church he attended in Cameroon and began to read the story of Jesusʼ crucifixion. Always before, this passage from Johnʼs Gospel had been read in French, but this time the priest had asked Leonard to read it in the local language, Yambetta.

As he read, he became aware of a growing stillness; then some of the older women began to weep. 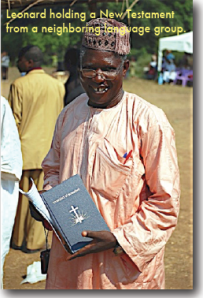 At the end of the service they rushed up to Leonard and asked, “Where did you find this story? We have never heard anything like it before! We didn’t know there was someone who loved us so much that he was willing to suffer and die like that… to be crucified on a cross to save us!”

Leonard pulled out his French New Testament and showed them that the story was in the Bible. “We listen to this Passion Story every year during Holy Week,” he told them, but they insisted that they’d never heard it before. That, says Leonard, is what motivated him to translate the Scriptures into the only language his people could really understand—Yambetta!

Leonard had to work full-time to support his family, and for most of the next 28 years, he could only translate when he found free moments. That made for a very long project; by 2008 Leonard and other Yambettas had drafted just 35% of the New Testament. The church was using the Yambetta Gospel of Mark and some lectionary materials, but those whose lives had been changed by the Word were still very much a minority.

Hope began to glimmer when an SIL Cameroon fund made it possible for Leonard to translate half-time for several years. And then in 2008, the glimmer of hope burst into bright light! The Seed Company picked up the project and began providing funds for training, equipment, and living expenses for Leonard and his team of translators and literacy teachers.

Leonard says, “I took it upon myself to translate for my people this Word of God that gives life. From 1980 on, this goal remained uncertain. But now, thanks to The Seed Company, I can see the realization of this dream, and I can only be happy—VERY happy! May this Word of Life that has saved many people from other language groups also save the Yambetta people!”

One of my colleagues from Wycliffe Associates is currently in Cameroon evaluating the connectivity needs of the Yambetta and one other translation project. He wrote: “In Yambetta we had a surprise meeting with the mayor. With the majority of the words spoken in French and some in English – he wanted to convey that he has heard of our coming and said that he is thankful and excited that we are helping Yambetta. ʻYou are bringing light to where there was darkness”.

Our work will help Leonard accelerate the process of Bible translation for the Yambetta people by giving him access to consultant help any time he needs. We thank all those involved for making this possible.