RSS
← Thank You Church!
Like Drinking from a Fire Hydrant! →

When your daughter comes home and tells you she’s met the man she wants to marry, you may ask her, “Does he have a job?”

In Nigeria, the parents would ask the girl, “Does he have dirt on his ankles?”

Uh, why would they ask this? Are they that concerned about his hygiene?

It turns out that the question is a metaphor for “Is he a farmer?” And if he’s a farmer, if he owns land, then he has some money and he is an intelligent man. Because all Nigerians want land. Land can be farmed. Land can be built on. And land can feed you. 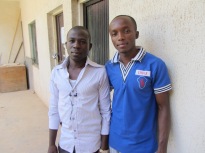 Two Nigerian men named Isaac and Ajinka are farmers. They have the potential of making two woman happy one day because they have land, but also, because they are cultivating more than the red clay soil that is so prolific in their country.

These men speak the language of Gole*. And they are also Bible translators. They are planting and growing the work of translating God’s words in their own language.

Every morning they get up and go to the farm. Their ankles get dirty as they kick the dirt into piles so that they can plant seeds. Maize, millet, soybeans and rice are grown in its season.

After doing their chores, they go to an office and work on the Gole language project. So far they have translated several chapters of Luke into their mother tongue. When people in their language group hear them reading the Scriptures and even speaking in their first language they say, “Where does this boy learn the language?” When each chapter gets published, the people are proud.

“I understand my own language better now that I am doing the translation. I realize that we have not truly understood certain passages in the Bible until now because we were listening to them in our second language [Hausa].”

Please pray for Ajinka and Isaac. They have a long way to go as they work two jobs each day. They need the encouragement and support of the local churches. I’m excited to see the growth of their work and the people as they embrace truth in their mother tongue.

Posted by Ken & Anne on June 20, 2014 in The Seed Company, Wycliffe Associates

← Thank You Church!
Like Drinking from a Fire Hydrant! →