I like that our partner organization, SIL, has created something necessary for so many people around the world. With technology often favoring well known languages it leaves millions of people at a loss when they want to use the computer.

We love languages! God created them all! Being able to type a language is important for Bible Translation.

So proud that this is now available. Give it a try here if you can use it for your own work!

Posted by Ken & Anne on August 2, 2018 in Bible Translation, Uncategorized

This is from the Wycliffe Bible Translators blog….

Thank you for your partnership in the ministry of Bible translation during 2011. God worked through your prayers and financial support to reach Bibleless people worldwide with His life-changing Word.

As the year draws to a close, you may be considering a year-end gift to Wycliffe. In order for gifts made by electronic funds transfer or credit card to be considered a 2011 contribution by the IRS, they need to be made by 4:30 p.m. EST on Thursday, December 29.  To give your gift, please visit http://www.wycliffe.org/give or call 1-866-736-4387.

Thank you, and may 2012 be a year full of blessing for you and your family.

We love you all and look forward to our continuing partnership in 2012.

A Tale of Three Churches

29 Jul
There once were three churches. These churches were established some time ago, most long before you and I were born. Someone had a vision, and planted them. They’ve each grown, thrived, waned and grown again….some over a 100 year history.
While each church has similarities, each is unique…like each of us. One church, Central Presbyterian, became a second home for a small, petite girl with a big name…Anne Barajikian. This church taught her in Sunday School, provided VBS each summer, gave her lots of opportunities to serve in music, allowed her to meet her heroes, missionaries from around the world, and most of all, stood up for the principles of God’s Word in the midst of a prominent town.

The second church, Dix Hills Evangelical Free Church, was home for this girl’s grandparents. While newer than the other two, it has made its place in Dix Hills and the surrounding area, growing in leaps and bounds. This church allowed this girl, now a teenager, to sing with her school and start ministering at a young age.

Church number three, First Baptist Church of Brewster, allowed this teenager, now grown up with children of her own, to minister in music as well as the children’s ministry. It nurtured her young family as they made their first steps toward joining a mission that would take them far away from their home country.

Central has used it’s “central” location and opened its doors to the arts. Many Sunday afternoons, beautiful opera music sounds out in their vast sanctuary. Many people who would not normally pass through a church door, now come to hear the music that they love in a new place. Thursday afternoons, Central hosts a children’s club which ministers to the neighborhood. While these may not be traditional events for a church, they are ministering to the people around them in a most perfect way.

Dix Hills, who allowed a young teenager sing on its stage, has continued the tradition of nurturing the youth to take leadership positions. The youth group runs VBS entirely on its own for a local church closer to the city. The next generation is being prepared to serve their God in a unique way.

Brewster, is trying something new….VBS on Sunday! Who doesn’t like VBS? Encouraging local children and their families to come to VBS on the most traditional day of the week to worship will show them that Brewster Baptist is a great place to be every Sunday of the year.

And so, each church takes its place in New York. Similar, yet unique. And each one is our partner…they come alongside us as we minister with Wycliffe with both prayer and finances. And they get to rejoice when God’s Word becomes available in the heart language of another people group.

But we are their partners too! So I get to rejoice after each concert, on Thursday afternoons, and at the close of another VBS. Because I’ve partnered with them as they have served. And we all lived happily ever after!

(Thanks for allowing us to come and share with you this month! We love you all!) 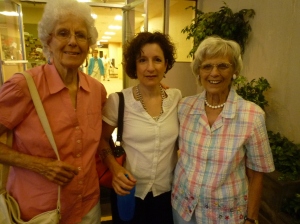 Many of us watched in horror as the videos and photos of the most recent earthquake and tsunami hit Japan last week. For those of us who have colleagues working in Japan, we were relieved to hear that all of our members are safe so far.

If you are like me, you are probably wondering how you can help and if it will make a difference.Wycliffe Japan has already joined in the relief efforts. They have teamed up with local churches in the area and have already packed up specific items needed in the area hardest hit in Sendai. A local church in Sendai sent them a list with very specific items to send and will be working at dispersing the items they receive.

If you would like to send a donation, you may send it to our Wycliffe USA headquarters and mark it “Japan: Disaster Relief Funds“. Here is the link online where you can donate: http://www.wycliffe.org/Give.aspx

You can get more updates on the situation on either of Wycliffe’s Websites www.wycliffe.net or www.thewordislife.net

Please keep praying! They have a long hard road ahead of them. What a wonderful opportunity for the body of Christ to come alongside those who are hurting so badly.